Some musings about maximizing space, budget, and time

If having 5 light stands and attached shelving unit, filled with plants, in a one bedroom apartment sounds like your idea of insanity, then send in the white coats! If it doesn’t, consider that the ambient humidity is 70% and that I work a 50 hour work week, in addition to my hobby (err... addiction). If this still seems normal to you, consider yourself in good company, but also know that the white coats might be knocking on your door soon as well!

I am always seeking ways to include more plants, without adding more stands and lights. I also am always trying to streamline things to make watering and grooming easier, as well as more occasional chores, like repotting, separating young plants, and washing the leaves. It isn’t easy when your space, time, and finances are miniscule, but your desire for plants -- and large growers at that -- is gargantuan. Here are some accommodations I have made. 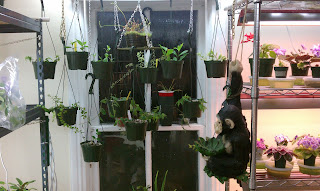 Photo of the old set up.

First, with watering, I will tell you what I had been doing and why, then explain what I do now.

I have always grown my plants on individual reservoirs. I have used pint containers and 8 oz deli containers, with a hole in the lid. I liked this method a lot, because it forced me to look at each plant at least weekly, kept the spread of insects down, and also afforded me the needed space between the shelves for lower light plants and taller ones as well.

The problem arose when I went from 2 stands to three, then to three stands and a shelf on the wall, and finally 5 shelves and a wall stand. It took 3-4 hours to fill all of those containers!

Being far too financially limited to purchase over 100 Permanest trays at about a $700 price tag, I opted to use the black, liner trays that come with 6 packs. The material is thinner and not as durable and is a challenge to move with water in them, but they are far less expensive, darker in color (shows less algae and residues), and work for what I need them for. I did not want to raise the plants on egg crate because I hate fighting to get the wicks back through the grate, with a shelf full of plants, and it cuts too much space from between the stands. My solution? I used the 8 oz deli containers I already had a ton of, bought a cheap soldering iron, and went to work, melting holes in the bottom of each one and placing the plant back on these, but sitting in the black, liner trays. Now, I fill the tray, which fills the deli containers, and everything is watered much quicker -- with far less hassle and expense -- than the egg crate and Permanest tray method. I bleach the deli containers and trays occasionally in the bath tub, or even the washing machine in the case of the deli containers, and I have a neat, clean looking set-up. I also didn’t lose the precious distance between the shelves. 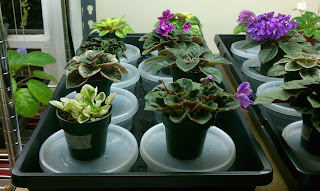 My next dilemma was what to do with my hanging basket plants since the bar hanging across the window, with a light over it, was far too full and very hard on the eyes. The solution was delightfully simple. I already had one of those wire shelving units converted into a light stand. I moved that in front of the window, hung either a 4-tube fixture or two 2-tube fixtures from a shelf, and then moved an empty shelf directly under the lights. It was a breeze to hang all the plants from the wire shelving, without tons of chains, hooks, and related hassle and paraphernalia. The improvement was instant! It is also much easier to water, turn, and accommodate the varying light needs on the plants. 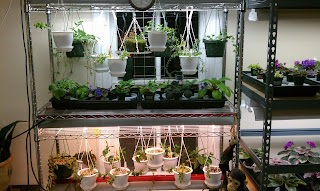 Another issue was lighting the tops of stands without drilling holes into the ceiling to hang lights from. I was rather delighted with myself when I managed to take some ½’’ PVC pipe, and with a few measurements and cuts, I used the available elbow and “T” joints to make a simple stand that could be zip-tied to the top of the top-most shelves. It worked great and was inexpensive.

Related to this was limited floor space to put up more stands. I saw a need for shelving affixed to the wall, not only for my plants, but as a sell to the landlord for allowing the attachment of the shelves to the walls: I would leave the shelves in place and they could function as storage space for future tenants.

The landlord was ok with the idea and I chose finished wood shelving, available at LOWES. Using simple brackets, a stud finder, drill, and some screws, it was not a difficult task to set the shelves in place, though I had someone do it for me because I am convinced I am woefully inadequate with such things, even though I really am not. Using four 4 foot by 1 foot shelves side by side, and one in front of the other, I had tons of additional space for at least 30 plants and the results are decorative; once I leave, being finished wood, any collectibles can be displayed there or items stored.

Then there was the issue with storage. My bottom drawer of my clothes dresser was a stash of plant pots, fertilizer, plastic bags, support rings, pesticides, and assorted supplies. I needed the space for clothes and it wasn’t at all very accommodating. While there is no substitution for organization and simple reduction, I had done all I could at the time and cut back my collection of plastic containers, and other things to as few as possible. I finally decided to simply set up an additional stand and commit to leaving the tops of at least 2 of them open for pots and repotting supplies. The things are easily seen and accessible, and I have my drawer back, for its intended purpose. 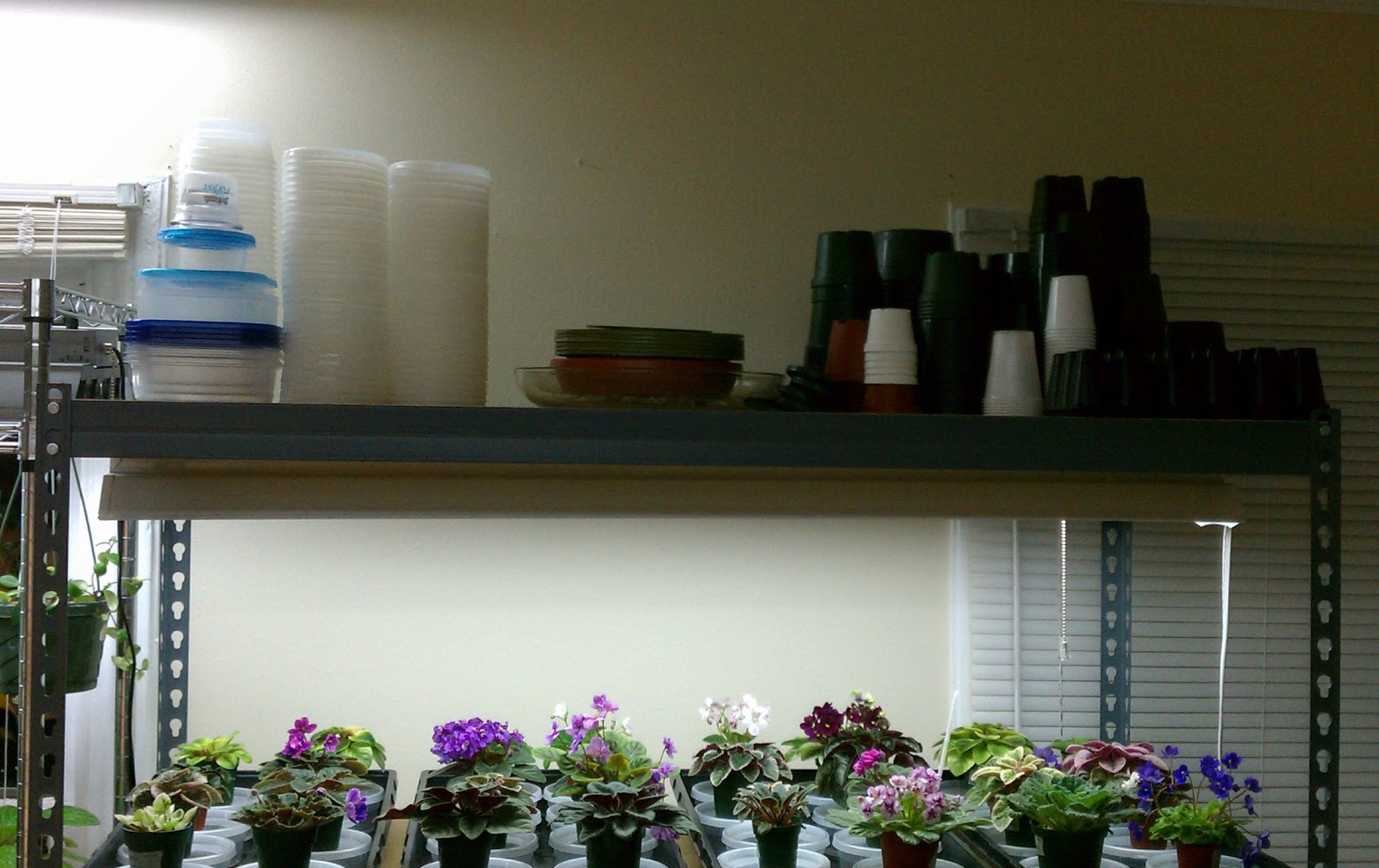 Posted by DCgesneriads at 1:20 PM