Another gesneriad that summers well in the garden is Seemannia.  These are photos by John Boggan of some Seemannia hybrids growing in his garden in Washington, D.C. These are John's newest creations: complex hybrids involving Seemannia nematanthodes 'Evita', Seemannia purpurascens 'Purple Prince' and Seemannia gymnostoma. John is testing them for use as bedding plants, and hoping for some relatively hardy hybrids. He says he is going to leave them in the ground (!) -- with mulch -- to see if any of them will overwinter.

I especially love the combination here with Tricyrtis 'Sinonome': Last year, he had his hybrids Seemannia 'Big Red', 'Little Red', 'Red Prince' and 'Dark Prince' in this garden: Streptocarpus 'Falling Stars' and Ludisia discolor in the garden

Back in June during the garden club event at Behnke's, I met Doug Bolt, a retired USDA scientist who researched animal reproduction. He told me about how he has used Streptocarpus 'Falling Stars' and Ludisia discolor (an orchid) as bedding plants. (Note: they are not hardy in the DC area, and do need to come indoors for the winter.) They had a rough time with the especially high temperatures this summer, but made it through ok. Here are a couple of photos from September: 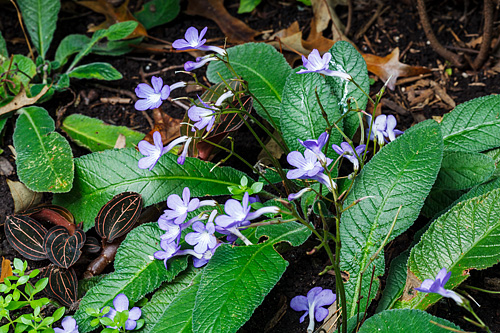 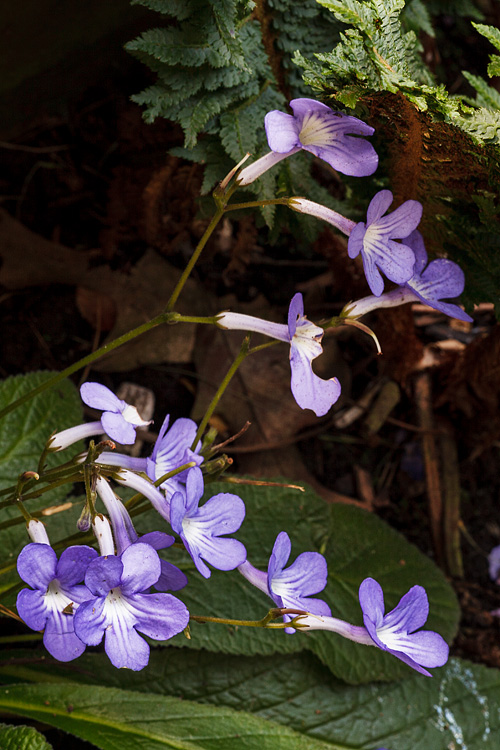 You can see more photographs of Doug's yard here.

Like many gardeners and plant enthusiasts I meet, Doug has a history with his plants. He says he grew up on a farm in Kansas that produced wheat, beef and pork, and that his mother and her mother were avid gardeners who could -- and did -- grow just about anything that struck their fancy. Growing now in Doug's front yard is the red Chinese hibiscus from his grandmother's living room. In his backyard is the rose bush his father gave his mother when they moved to the farm in the 1930s, and near it is the miniature rose bush he gave his wife before they got married in 1975. He even has the first Phalaenopsis a friend gave him in 1969. He says his aversion to discarding plants is largely responsible for starting to use Streptocarpus and Ludisia discolor as accent/bedding plants in the garden. By spring when the houseplants go outside for the summer, many have overgrown their pots -- it seems obvious to just poke the extra divisions in the ground. And most do quite well.
Posted by Kyoko Imai at 11:20 PM

Next meeting: October 13, 2012 at the National Arboretum

The National Capital Area Chapter will be holding its next meeting at 10:00 a.m. on Saturday, October 13, 2012, at the U.S. National Arboretum in Washington, D.C. The topic this month is reclassification of the genus Chirita.

All species formerly known as Chirita have new genus names, such as Primulina, Microchirita, and Henckelia. Where can you find out the new names? The World Checklist of Gesneriaceae on the Smithsonian's website is up-to-date for these changes to Chirita species.

This grand plant is Henckelia speciosa 'Ako Sky', formerly Chirita speciosa, exhibited by Bill Price at the 2012 Convention of The Gesneriad Society in Seattle.