Back in September, I put in a few entries for our Gesneriad Society chapter's show. It was my first time entering a show (and novice that I was/am, I didn't let anyone know I should be in the novice categories!).

While on the lookout for containers that would be good terraria, I had come upon a glass butter dish at Target for a few dollars. I thought it would make a nice little tray for the show. And it did, although unfortunately I don't have a better picture for you other than this cropped, blurry one due to a recent computer harddrive incident. 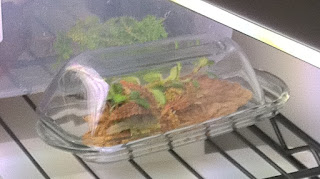 I had a bit of sphagnum holding the Nautilocalyx pemphidius, Streptocarpella 'Good Hope,' Sinningia pusilla, and some blue Selaginella for nice colour contrast. The Streptocarpella was splayed out over a small wood nugget for a backdrop--it looked like a corsage to me, but also like Snow White's coffin. By show time, the S. pusilla had three open blooms on it, and the Streptocarpella's growing tip had started angling upward--which is what I had wanted it to do.

Although the terrarium ended up winning People's Choice, it got the red third-place ribbon and netted 80 points. The judges liked the design concept and the condition of the plants, but knocked me down a few points for cultural perfection and a giant chunk for suitability--they left a note asking "Will the plants grow in here for long?" My take on the "Suitability" section (which reads basically that plant material/accessories either complement or do not suit the design) is that what's used for the design, well, makes that design work--I probably could have selected plants that would be a bit more culturally perfect in such an environment and thought more about an actual design concept, but from the judges' comments, it seems as if they marked me down for the theoretical longevity of the plants within the container--not the plant choices themselves. 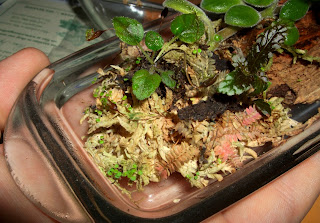 Well, judges, I just want to share with you that five months later, these plants are not only still surviving, but they're making copious babies! (Except the Selaginella, unfortunately. I think they would prefer not to grow almost strictly in sphagnum.) Some of the Sinningia pusilla seedpods are still attached to the plant--and dozens of seedlings are popping out of them in mid-air. 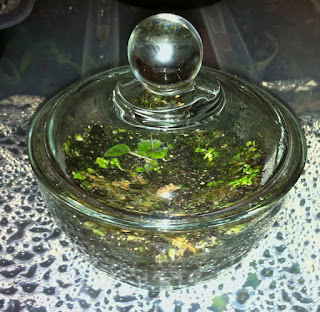 I repotted some of the Sinningia pusilla into another glass container I purchased at Target so I can have a single place for the plants to go crazy. 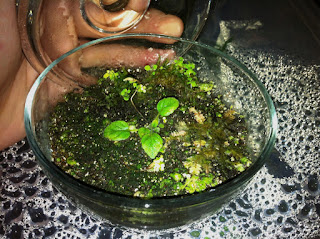 These little babies will be the makings of many landscapes for future shows, many terraria for my own uses, or for sharing at NCAC meetings. Luckily, I already have another container I'm planning on bringing to this month's NCAC meeting on Saturday 10 March--a propagation workshop!
Posted by DCgesneriads at 9:07 AM