Earlier this month, at our chapter's semiannual show and sale, a good chunk of the event centered around featured speakers giving talks about different aspects of growing gesneriads. I was able to nab a chair for two of the talks, the first being hybridizer extraordinaire Dale Martens' talk on how to grow and show Streptocarpus like a pro. 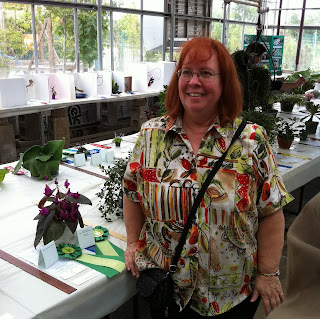 Dale Martens next to one of her hybrids, Smithicodonia 'Heartland's Joy,' exhibited at our show by Nell Reese. Photo by me.


I'm a fan of Streptocarpus in general--but they just don't like me the way I like them. Sometimes, I think they choose to end their lives rather than remain in my care. So I was interested in learning what Dale had to share about growing these tricky beasts. One of the first tips? Wick watering! 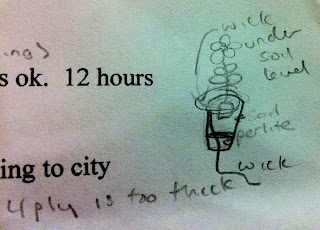 Here's the little wick-watering diagram I sketched on my notes during the talk. Photo by me, too.


It's not something I've really yet tried, although I think I should at least give it a go if I want to keep growing Saintpaulia and Streptocarpus. Dale uses little plastic containers with lids that have two holes--one for the wick to go through and the other to refill the water. Inside the plastic container is a "diaper," she calls it--a plastic bag to hold the water. That way, when the water gets all icky, you can just throw away the plastic baggie instead of the more durable plastic tub.

She suggests leaching the plants by running clean water through them (which she does on a grate she places on top of her toilet) every 8 weeks and replacing the "diaper" bags when the water gets too green and icky. After leaching, Dale pours a cup of balanced fertilizer without urea through the soil as well (she suggests 1/4 tsp per gallon of Dyna-Gro Foliage-Pro 9-3-6 or 1/4 tsp per gallon Epsom Salts).

Wicking seems tricky to me--it's adding a technical/mechanical level on top of something that can be complicated enough when you grow plants from tons of different families. Dale says to use 2-ply acrylic yarn: Cotton rots, and 4-ply yarn is too thick--it'll suck up the water and keep your plant way too moist! Even with 2-ply yarn, you have to use light potting mixes chock full of perlite: Dale uses 1 part brand-name potting soil, 1 part perlite, and 1/2 part vermiculite. She also pasteurizes her soil (which is a totally good thing to do in theory, but for some reason I never seem to get around to trying that, either).

For light? Dale uses 4 T-8 fluorescent tubes (better light, less heat) or 2 T-12 on 12 hours each day, every day. (Okay, so I'm good on the T-12 score--that's my regime as well, so score at least one point in my plant-growing endeavors!)

We got a little down-'n-dirty with Dale and talked about baby-making. Streptocarpus flowers take some coaxing to get the best results--she suggests waiting about a week before introducing male bits to the female bits. Male bits (pollen) can be stored in the refrigerator until it's ready to be used. A fertilized flower should fall off pretty soon after fertilization, and the pod will ripen in about 8 weeks, turn brown, and untwist. Dale uses acrylic paints (cheap sets of little tubs at craft stores or Walmart for about $3, Dales says) to mark the calyx of pollinated flowers and labels the father on tags--so you can pollinate many mommy flowers on a single plant with a ton of different daddies! Sow seeds in a container with a lid (one of the best excuses to order Chinese delivery) and transplant in the first week after sprouting and every 2-3 weeks after that. 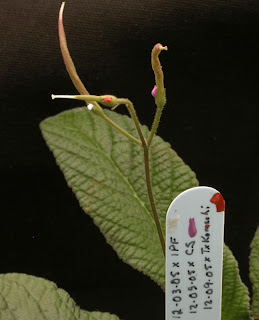 Using the acrylic paints, Dale marks a mommy flower's calyx and the tag with information about who the daddy is and the date of pollination. Photo graciously provided by Dale Martens.


An easier way to get new Streptocarpus may be by leaf sections--Dale suggests cutting horizontal (not the usual up-the-middle division) leaf sections under water and leaving them there for 3-5 minutes. Be sure to note which is the bottom end--that'll be the part you want to stick in the soil (or in a disgustingly green wick reservoir for about a month) for it to root. If you're leaf-propagating a variegated Streptocarpus, make sure the leaf section has a good mix of green and white or you'll end up with a less-interesting green--or a white plant without chlorophyll or the ability to survive.

If you already have a well-established plant, you may find several plant clumps growing together. You may want to divide them into separate plants--which Dale did with a sharp knife right in front of me. In a blink of an eye, with one swift slice through the root ball and a quick yank, she suddenly held two Streptocarpus up. It got my heart racing and scared the crap out of me--but the plants will be fine and healthy in a few weeks. She suggests trimming the older leaves (but leaving a bit of a stub, which may make new plants) and cutting flower stems for the next 3 months--you want the plant to develop its roots and leaves, not spend its energy trying to have sex.

What to do with all these beautifully grown and propagated Streptocarpus? Enter them into a gesneriad show, of course! Dale suggests planting the show plant in final show pots 5 months before a show to let it grow into its new home--the plants seem to bloom best when rootbound.

What will I do with my two new Streptocarpus 'Bristol's Moose Stash' and 'Christmas Morning' I got at the show the other week? I'm going to buy little plastic tubs of pecans and walnuts to make reservoirs for them and hopefully grow them well enough to have them show-worthy at the next NCAC show in spring 2013!
Posted by DCgesneriads at 7:23 AM