[Editor's note: Jim Roberts recently visited southeastern Yunnan Province in China, and will be speaking about his trip at our meeting on May 14, 2011, at the National Arboretum in Washington, D.C.; doors open at 10:30 am; program starts at 11:00.]

The first of the Paraboea I collected in China is starting to bloom. These plants were dried up clusters of leaves two months ago. The Gesneriaceae of South China lists several species of Paraboea that flower in March/April. I'm leaning towards P. dictyoneura. It is used in Chinese medicine to increase blood flow, acesodyne (applied as a pain relieving patch) and detumescence (applied to reduce swelling). 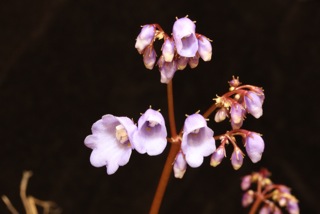 Even though the plant hasn't fully recovered from its dormant state (still has last year's leaves), it is putting up a lot of flowers.  Another of this same species in a pot next to this one is sending up as many flower stalks, and is also sending out a new crown of leaves from the base of the plant.  Of course I'll have to set seed and check out the seed capsules to confirm identity.  Some of the Paraboea have twisted pods; others are untwisted.  I may also have to supply a few flowers to a botanist who knows what all the parts are that are described in the plant's description. 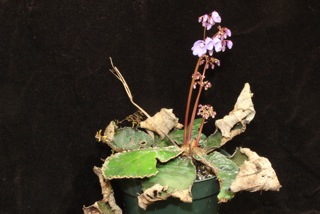 One of the reasons I'm leaning towards the plant ID that I am is the calyx. The other species that flower at this time of year have wider calyx lobes. Of course it doesn't help that the first flower that opened has twice the sepals and petals that any flower in the genus is supposed to have.... 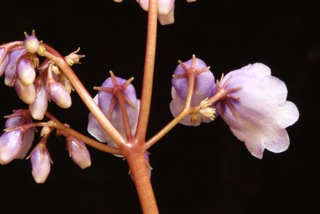 Jim Roberts
Posted by DCgesneriads at 7:10 AM