What is this Conandron that won Best in Show? Is it one of those alpines?

When I learned of it a few years ago, I thought it should be growable in the DC area (envision Rock Creek Park or the Asian slope at the Arboretum) with a little micro-climate tweaking along the lines of a sprinkler/waterfall in the spring and summer, and some extra protection in the winter. I had hoped for some outdoor growing space to test this theory, but alas....

What follows is basically the results of my web research. There should be more information available, especially in Japan, China and Taiwan.

First, the World Checklist on Gesneriaceae:


According to the BG Plants database (of plants in its BG) of Chiba University (with my rough English translations of the common names):


And now for photos. This page shows it growing on a rock wall in Kamakura, some 60 km / 37 miles south of Tokyo on the coast. And on this page (if you scroll down) are more photos of it on a rock wall on the grounds of Tokeiji Temple, in Kita(north)-Kamakura, which is further inland but still at a fairly low elevation - it's about a 40 min walk up to the top of a nearby "mountain" of 150m (500ft). According to this (blog) page, it is f. pilosus that grows around Kamakura, blooming about a month earlier than the non-hairy variety. However, in cultivation, the bloom period is reportedly about the same. Blooms in mid-May to early June means that it flowers before the rainy season arrives in full force, and before the real summer heat.

Here is the non-hairy form growing with ferns on rocky walls in Shinji-cho, which is across Shinji Lake from Matsue City in Shimane Prefecture. That's on the coast of the Japan Sea, some 780 km west (485 miles) of Tokyo. What a coincidence, I was there briefly last year (but no gesneriaceae sightings...). This page says that its range is from Fukushima (290 km / 180 m north of Tokyo) to the southern island of Kyushu. Other pages report this to bloom in July and August, in cool, shady spots.

There are many more photos online, many without specific location information. Both Shinji-cho and Kamakura are coastal areas, with very hilly terrain not far from the coast. The photographs are from locations slightly inland, but not so far as to be into the hilly terrain. Having spent only a couple of days in each place, I can't speak to the climate but I recall Kamakura being very wet and humid, whereas in Matsue I saw layers upon layers of low altitude cloud cover. Oh, and I guess it was raining when I was there.

But some actual weather data would help. Here are comparative monthly high and low temperatures for Matsue, Kamakura (actually a little further south and on the coast, Tsujido), and DC. For a legibly-sized PDF of these (including metric measurements), click here. 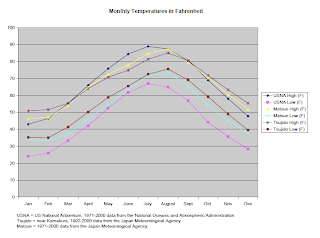 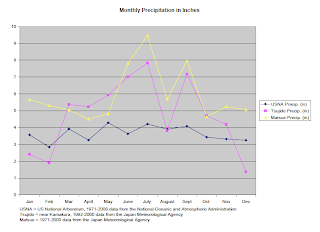 Of course, we should keep in mind that these are averages. Also, the weather stations are (presumably) located where they are functional, and not near rocky hillsides with foliage cover, and the topography indicates significant microclimates in both Kamakura and Matsue.

From the temperature data, we can see that DC is colder and is the only location among the three that dips below freezing. (Snow has been recorded in Matsue: greatest recorded was 20 cm annual snowfall.) Also, the difference between the highs and lows is greater throughout the year in DC.

As noted above, the distribution ranges further north and south, and so it may be tolerant of lower or higher temperatures. C. var. taiwanensis (ryukyuense) hails from Taiwan, China and Iriomote (second largest island in Okinawa), and is likely more heat and humidity tolerant - however elevation and other information would be helpful. Pictures from Taiwanese web addresses here, here, here and here.

Natural habitat conditions should inform (but perhaps not necessarily dictate) how to grow a plant in cultivation. What I'd really like to know is whether it will survive freezing rain if it's on a rock face instead of in the ground? (I would still like a rocky wall with a rainy season on a timer - and frost protection please. Then I could grow some lithophytic ferns too.)
Posted by Kyoko Imai at 8:43 AM