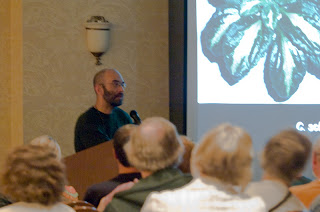 I have been really blown away by the lectures today. The first one I went to was Peter Shalit's talk on Chiritas, and it was wonderful. (At left, photo of Peter taken in darkness during the presentation.)

Peter had pictures of some newly discovered species, and some species and cultivars that are in cultivation in Asia, but not here in the States. All I have to say is...wow. Unfortunately I don't have any of the pictures to share with you, but what was most amazing about them was the flower forms and shading, they showed far greater variation in coloration and flower shape than I've seen in the varieties typically sold in the U.S. One even looked like small yellow bells! He then discussed the various sub-groups of Chiritas, the section Gibbosaccus, Annuals (section Microchirita), and Miscellaneous (section Chirita). He also discussed propagation, hybridizing, and his own hybrids.

The Gibbosaccus or "Leather-Leaved Chiritas" are what usually comes to mind when you think of chiritas, the smallish rosette-shaped plants with flowers tending to lavender and white. Peter had some beautiful slides of some of the new introductions.

Annual Chiritas are true annuals, living about a year or so. I hadn't known they existed, but based on Peter's slides, many of them are lovely and very worth growing! Getting your hands on these is more difficult than obtaining the Gibbosaccus types, especially as they must be propagated by seed, but Peter recommended obtaining seeds from The Gesneriad Society seed fund.

The Miscellaneous group included some real show-stoppers, particularly C. walkerae, C. moonii, and their hybrid, C. 'Moonwalker'. These are tall, shrubby plants with large lovely blue/violet flowers that to me resembled thunbergia blooms. I even bought a Moonwalker, which Peter says needs more sun than most Chiritas.

Surprisingly, he mentioned that C. tamiana may not even be a Chirita at all, that its proper genus is currently subject to some debate.

Peter gave us some tips on propagation, the ones that stuck in my mind were: (1) that the soil can and should be fairly dry. He showed potted leaves and their soil was far drier than that I've typically used for, say, violets. As he explained, this helps solve the problem so many of us have, that the leaf rots before sending up plantlets. (2) He also mentioned that when he puts down leaves, it's not unusual to get 20 plantlets!

Peter also discussed his hybridizing process and some of his hybrids. Chirita seed pods take 1-2 months to ripen, and then 8-12 months from seed to bloom. Interestingly, many of the plants have juvenile forms that are different than their mature forms. I was not familiar with many of the hybrids he showed, but the one I liked the best was 'Deco.' Its leaves are almost oval or round, and very silver, and to me its flowers looked particularly elegant.

I haven't done Peter's talk justice, but really it was great, and if he's ever giving a talk in your area, go see it! It was a measure of how great it was that after his talk the Chirita table in the show room was totally mobbed!

Today was great and I'm looking forward to tomorrow!